WHAT IS AN INVASIVE SPECIES?

An invasive species is a species that is not native to the area where it is found.

WHY SHOULD WE BE CONCERNED ABOUT INVASIVES?

Invasives may cause harm to the environment, to the economy, or to humans. Invasives can spread rapidly and may cause extinction of native species.

HOW MANY INVASIVES ARE FOUND IN THE GULF OF MEXICO?

The Southeastern United States has the dubious honor of harboring the greatest number of non-native species in the continental United States. In the Gulf of Mexico there are several invasives but most of them are not at all common in the northern Gulf of Mexico.

WHICH INVASIVE SPECIES ARE THE MOST COMMON?

It would not be unusual to encounter an invasive species in the Gulf of Mexico or coastal areas. The photographs below depict some of the most common species in approximate order of decreasing abundance.

There are two lionfish species presently known but the species on the left, Pterois volitans is far-and-away the most common. This invasive was first identified off the coast of Mississippi in 1993, and in 2000 massive aggregations appeared in the Mississippi Sound and surrounding waters. This shrimp introduced from Asia and may grow to over a foot in length. The color varies but the black stripes along the back are distinctive. Image courtesy of the South Carolina Department of Natural Resources. Known for spectacular leaps en-masse, this species is predominantly freshwater but has been found in brackish waters. The fish have been observed in Lake Pontchartrain, LA and near Bay St. Louis, MS. Image by Harko Akos, Wikimedia Commons. Named for the coloration on the shell, black zig zag stripes on a cream background, this species has been found in coastal Louisiana and Mississippi. They have a distinctive “D” shaped shell and grow to a maximum size of about 2 inches.

A large (17 to 25 inches), semi-aquatic, herbivorous rodent. Nutria are extremely common along the coast of the northern Gulf of Mexico.

The Asian Clam is found throughout the freshwaters of the southeast. It is found in many coastal areas of the northern Gulf of Mexico.

The blue tilapia, Orechromis aureus although not common in freshwater of the northern Gulf of Mexico it is not uncommon in south Florida and has been reported from Texas, Louisiana and Mississippi.

The grass carp, Ctenopharyngodon idella may be found in the coastal freshwaters of the northern Gulf of Mexico. Image credit, Michael Rupert Hayes, Wikimedia Commons.

The Bighead Carp, Hypophthalmichthys nobilis is found in the freshwaters of all states that border the Gulf of Mexico.

Other species that are much less common but have been encountered in the Gulf and coastal areas. These species are not presently considered invasive as their numbers are very low.

A very large (150 lb) rodent that has been reported from the Florida panhandle. Prefers to be near rivers, lakes and swamps. 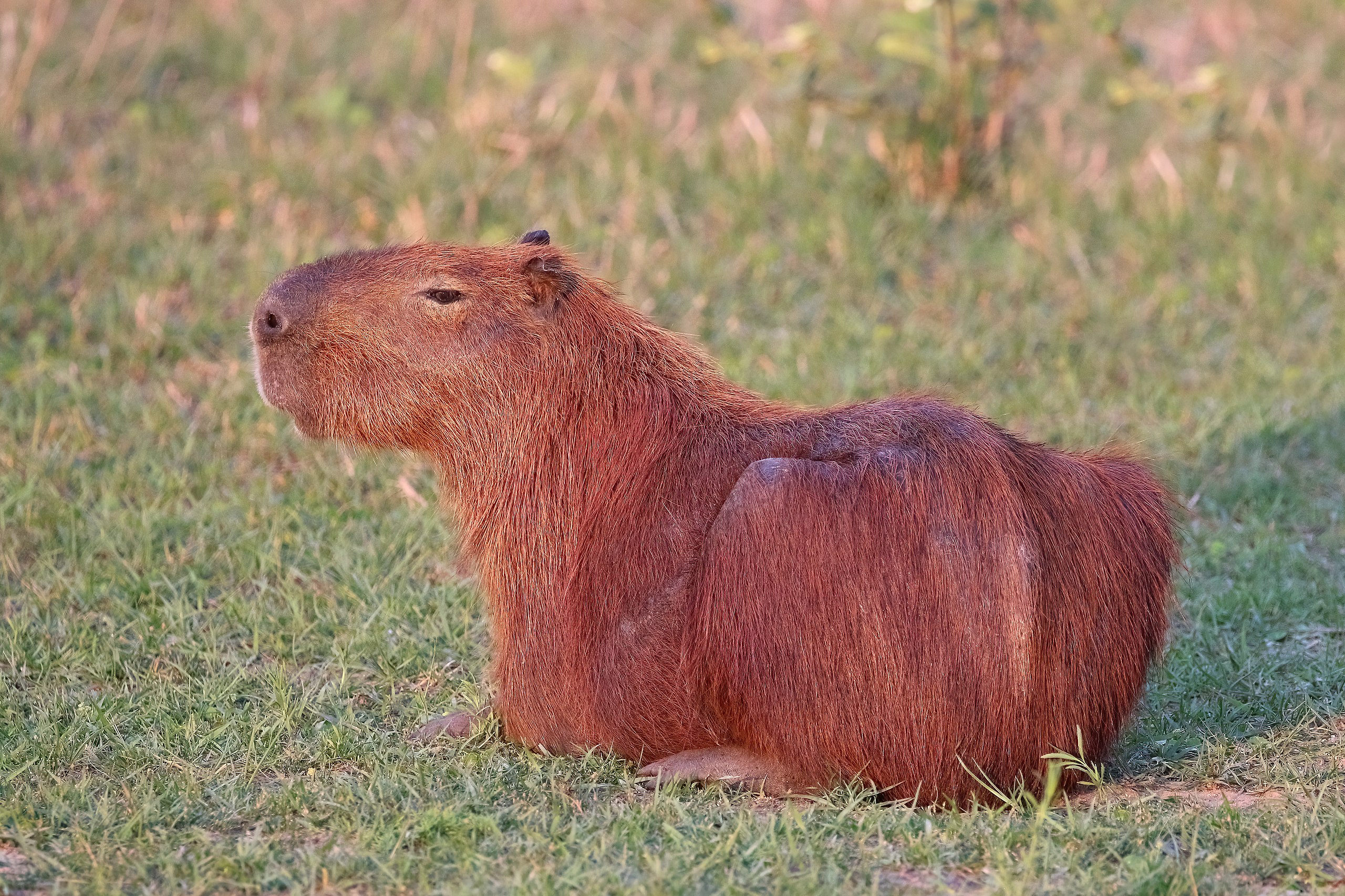 Body grey, blue coloration on fins, yellow or white posterior margin of fins. More common in the southern Gulf of Mexico, this species has been found off the coast of Texas, Mississippi, Alabama and the panhandle of Florida. This fish is predicted to be the next invasive in the Gulf. Image credit: Rick Stuart, Reef Life Survey.

Orange spots on body and fins. The dark spot behind the eye is distinctive and can be used to separate this fish from the orange-spotted blenny. First identified on oil platforms off of Cameron, LA and Galveston, TX. Image credit: NOAA Photo Library.

Light brown shell with red spots and markings on it, and red claws and legs. Has been captured in Florida, Alabama, and Mississippi. Image courtesy of the South Carolina Department of Natural Resources. Larval stage depends on brackish water but juveniles and adults live entirely in freshwater. May grow to a length of 12 inches. Observed in Mississippi near Davis Bayou. Image credit: Citron, Wikimedia Commons. 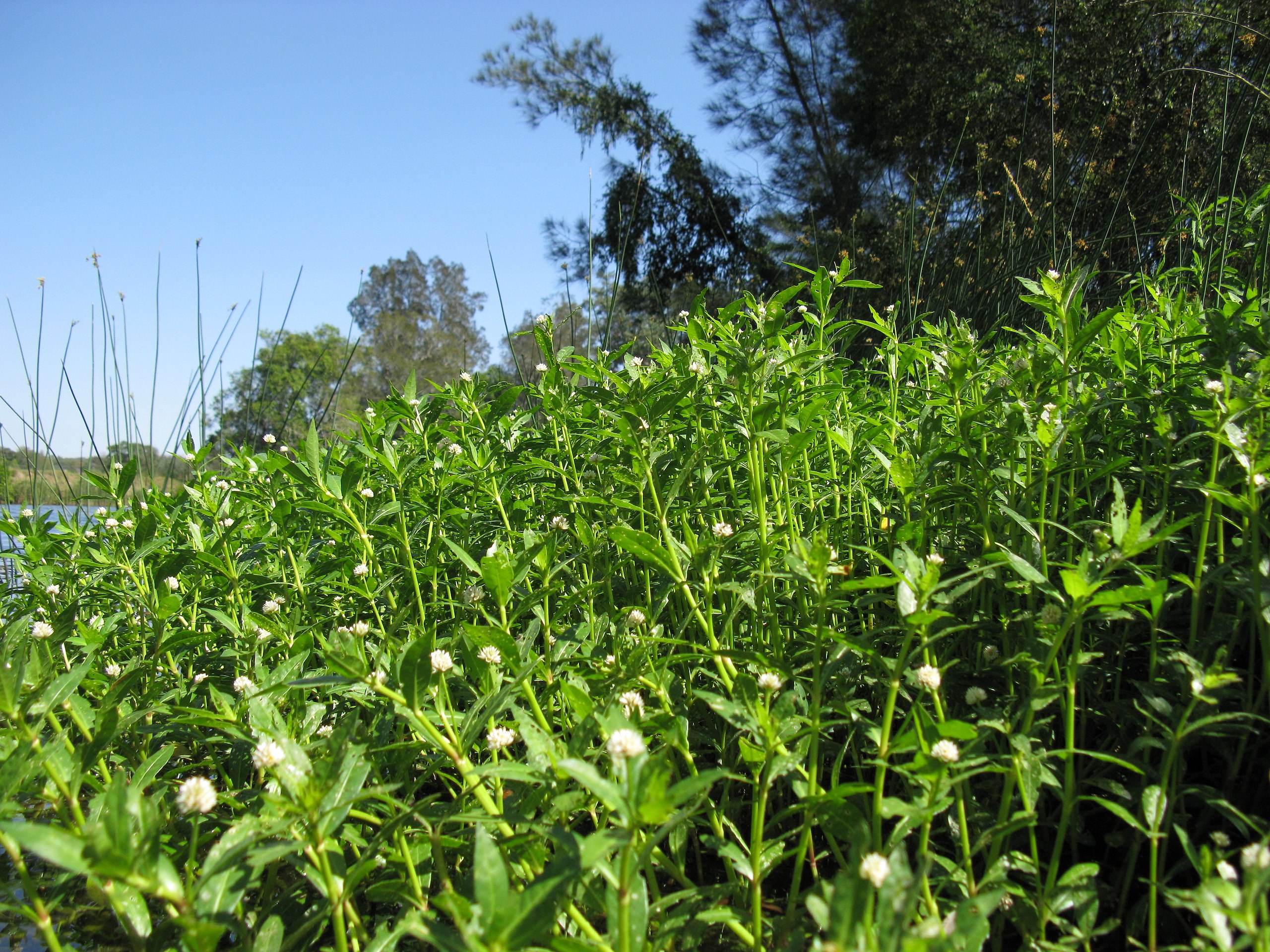 A small, floating fern. Freshwater aquatic plants, no true roots, bears hairs on the leaf surface. A serious threat to waterways of Mississippi. Found in many coastal bodies of water. Low growing, attains a height of 1 to 2 feet, rounded, silver cast foliage, small blue flowers. May eliminate native plants and may destroy sea turtle nesting areas. Plants grow well in dry, infertile soil such as beaches. This invasive has been recorded from Alabama, and Mississippi, as well as Okaloosa and Franklin counties in the Florida panhandle.

Grows under water but flowers emerge above surface. Leaves appear as thin tubular leaflets. Rapidly spreads, forms thick mats in shallow areas, blocks sunlight and kills native aquatic plants. It is It occurs in many places in the coastal Gulf of Mexico. Image Wikimedia Commons.

The common reed, Phragmites australis is invasive in many parts of the U.S. and is found in coastal areas of the Gulf of Mexico. It attains heights of 1 to 6 meters and forms dense stands that crowd out native species. Leaves are elongate and drooping and flowers are purplish when young and straw colored at maturity. Image credit AnRo0002, Wikimedia Commons.